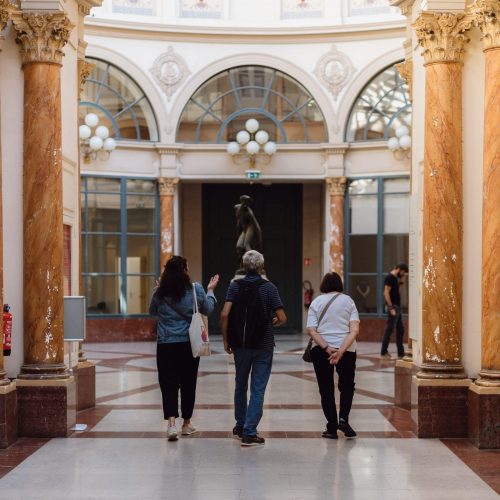 Guided tour of the Covered Passages of Paris

There were 137 of them in 1828, nowadays only 24 remain.  These alleys, called ” covered passages “, are a fabulous witness to the history of Paris and its extraordinary development at the dawn of the 20th century.

If you are not a Parisian, you probably don’t know that behind many of the city’s boulevards are hidden more or less secret alleys. So it’s time to go on an adventure and discover them!

We’ll meet on the square right by the entrance of the Bourse de Commerce – Pinault Collection.

Thanks to this exceptional visit, discover seven covered passages located on the right bank of Paris. During this tour, i will give you some fascinating anecdotes of a bygone era. I’ll take you through some of the most beautiful passages of Paris:  Passage des Panoramas, Galerie Vivienne, Passage Jouffroy… And we’ll plunge back into the atmosphere of 19th century Paris.

You will also visit other passages little known to the general public, whose historical interest, just as important, will allow you to understand to what extent the passages have revolutionized the trade of the time and the life of the city.

Passing through the Grands Boulevards, this guided tour of the covered passages will also be an opportunity to learn about the work of Baron Haussmann and the new face given to the capital at the end of the 19th century. On the way you will also visit sumptuous places like the Palais Royal, which is full of anecdotes and unusual stories!

Don’t miss this guided tour of the covered passages in Paris, a very Parisian and original invention copied in the provinces and used all over the world !

Previous
Next
0
YOUR CART
Subtotal:
0,00€
CHECKOUT