After a little trip to Mont St Michel, I decided to take a look at the story of  Saint Michel. You know that archangel in armour that kills the dragon? I felt like revising my biblical iconography classes, and learning more about the legend that links it to the Mont St Michel… of course, I want to share it with you!

Michael, Mîkhâ’êl in Hebrew, means “Who is like God?“. He is one of the four major archangels along with Raphael, Gabriel and Uriel. Archangels are not hierarchically the highest, but only they have the ability to act in the name of God without needing His permission. Michael is the supreme archangel, he is represented as the head of the heavenly armies (hence his representation, mostly in military dress), and is the defender of the Church. He defeats Satan during the war of angels at the time of Revelation, and he is also the right hand of Jesus whom he helps to judge souls during the Last Judgment.

The legend of the Mont St Michel begins by the fight against Satan and the demon of the Apocalypse during the war of the angels. It comes from a Latin text from the Revelatio ecclesiae sancti Michaelis in monte Tumba written by a canon of Mont-Saint-Michel or of the cathedral of Avranches at the beginning of the 9th century.

Saint Michael was one day called to fight against the demon who, in order to fight, had transformed himself into a fearsome dragon. The battle began on Mount Dol in Brittany. Satan, assisted by his evil hordes, fought fiercely. The fight with an uncertain outcome continued in the sky for several days before it ended up far from where it started, on the Mont Tombe, (Mont Saint-Michel).

Aubert, bishop of Avranches, is a witness of the fight, he receives in a dream-vision the order from Saint Michel to build him a place of devotion in the place where he defeated the demon. The poor bishop, fearing madness, does not dare to do anything and decides to wait. The archangel manifests himself a second time but Aubert still doubts. At the third demonstration, Aubert can no longer doubt. Indeed, Saint-Michel, furious, leaves in his skull an undeniable proof of his presence, he pressed his finger strongly on his forehead and left a mysterious imprint: a circular hole.

Aubert woke up with this hollow on his forehead and understood the veracity of the archangelical order. History reveals that, in 708, Aubert had a small cave-shaped oratory built that could hold about a hundred people. A construction that will mark the beginning of what will be the Mont Saint Michel. In case you’re wondering about this legend and veracity, Aubert’s skull is today preserved in the basilica of Avranches, and you can still see the famous hole!

But let’s come back to Saint Michael and his representations, which you can see everywhere in museums, or even as a sculpture among our cities! The most common representation in Western medieval iconography and the centuries that followed was that of the knight in armour, Saint Michael armed with a spear, sometimes with a flaming sword and a shield decorated with a cross. Heavenly protector, he is represented slaying a dragon, which symbolizes Satan and not a simple demon. But careful not to confuse Saint Michael with the representations of Saint George. Michael is usually on foot while Saint George fights the Dragon on horseback, and above all, Saint Michael is winged while George is not, which makes it possible to distinguish them.

The oldest representation of the Archangel Michael in the west dates back to the 9th century and is a bas-relief carved in the underground sanctuary of Monte Sant’Angelo, depicting him with a balance weighing souls. Another of the oldest representations is a  bas-relief of about 1140 that depicts him weighing souls in the tympanum of the Last Judgement of the Cathedral of Saint Lazarus of Autun.

Saint Michael is thus, through Ancient and New Testament and his many representations, the symbol of the power of the forces of good against evil. And did you know that he is the patron saint of Normandy and France? 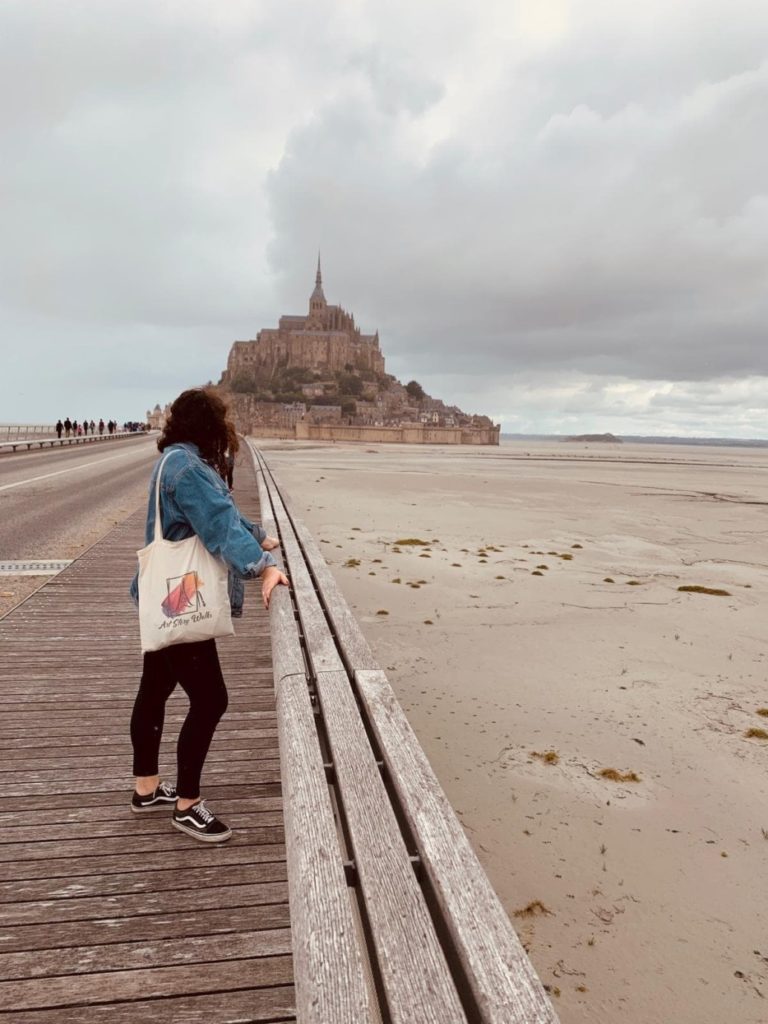 I hope you enjoyed this article, that you will remember the legend of Mont Saint Michel’s foundation on your next visit there, and that you’ll now recognize Saint Michel in every representations of a winged man killing a dragon!!