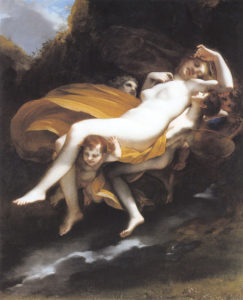 No one lived there, and it was only at night, in the darkness, that Cupid joined her in bed, prohibiting her from seeing him. Pysche was bored alone in this palace, she then obtained from Cupid to visit her two sisters. The sisters learnd about this man who visited their sister at night, and that she never saw his face. They persuaded Psyche to override this prohibition to finaly see what type of monstrous being would show up only in the darkness in her bed.

One night then, Psyche took a lamp, lit it and looked at Cupid’s face. Troubled by the beauty of the sleeping young man, a drop of burning oil fell on him. Awakened and betrayed, Cupid flew away to his mother, confessing to her his betrayal, leaving Psyche alone in the palace.

Desperate, she looked everywhere for her lover and ended up speaking to Venus herself, who, of course, wanted to get her revenge. Venus kept Psyche in slavery and imposed upon her four seemingly insurmountable trials. But friends of Cupid helped her: Ants helped her to sort seeds mixed together. Forced to bring back the wool of the sheep eater of men, a reed advised her to mow them during their sleep. An eagle drew water from the Styx, the river of the Underworld for Psyche. Finally, Venus ordered her to go down to the Underworld to bring her back a bottle containing an ointment of beauty held by Proserpine.

Persuaded that she would not be able to do this last test, she was about to throw herself from the top of a tower, but the latter gave her a wise advice for this last task: give Cerberus, the 3-headed dog, guardian of the Underworld, a cake permeated with sleeping pills; bring two oboles to pay for the round-trip of Charon, the river Styx’s ferryman, and when she’ll be at Proserpine’s house, to not sit down and to not eat, if she did not want to remain eternally in the world below. Very important as well, she was not suppose to open the bottle of ointment that the goddess will give her. But on the way back, eager to try the ointment of beauty destined to Venus, she opened the bottle, breathed the deadly smoke that escaped from it and she died. 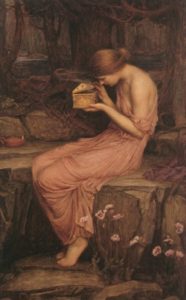 Cupid, forgiven by his mother, went to search for her, and found her dead. He resurrected her with one of his arrows, he took her to Olympus, where Jupiter (Zeus) himself celebrated their union from which their daughter Voluptas, was born.

Finally a love story that ends well! It’s a myth that has often been used by artists, whether in painting, sculpture or even in tapestry. Being the object of many interpretations, the myth evokes subjects such as true love, marriage, the separation of lovers and the trials to overcome in order to find the loved one. It also allows artists to create works with a great sensuality and a certain eroticism.

In painting, this is the case of the artist William-Adolph Bouguereau (1825-1905) who made the theme of Love and Psyche one of his favourite themes. In fact, the artist is often assimilated to the so-called “cute” or “kitsch art” because of his many paintings around themes of love, presenting winged children and allegories of love. Bouguereau, to address the myth of Love and Psyche, chose to represent essentially one episode. He painted, between 1887 and 1895, four paintings dealing with the kidnapping of Psyche, and her travel to Olympus. 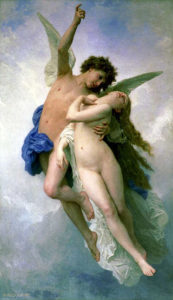 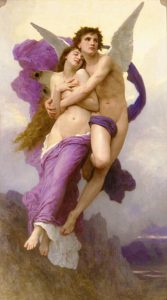 It appears, however, that he also made his own interpretation of the myth, representing the two protagonists, not as adults in accordance with the literary tradition, but as children (1890). 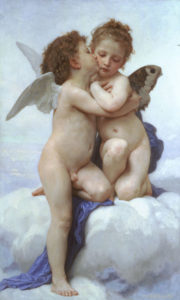 In sculpture, we can think of Antonio Canova (1757-1822), whose two of his sculptures dealing with the theme of Love and Psyche are preserved in the Louvre, Psyche brought back to life by the kiss of Love being one of the masterpieces of the Museum. Canova chose to represent the strongest moment in history, the one when Cupid, recognizable to the quiver he wears on his back, brings her beloved one out of sleep. 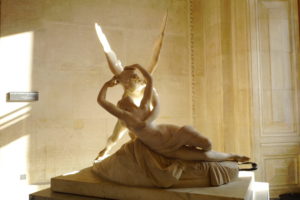