One of the first museums to reopen after the quarantine was the Marmottan Monet Museum. During a visit to the museum, which holds the world’s largest collection of works by Claude Monet, I found myself face to face with one of  his first masterpiece: Impression, Sunrise.

Painted in 1872-73, it is undoubtedly one of Claude Monet’s best-known paintings, but also one of the best known in Art History since it gave its name to the Impressionist movement. 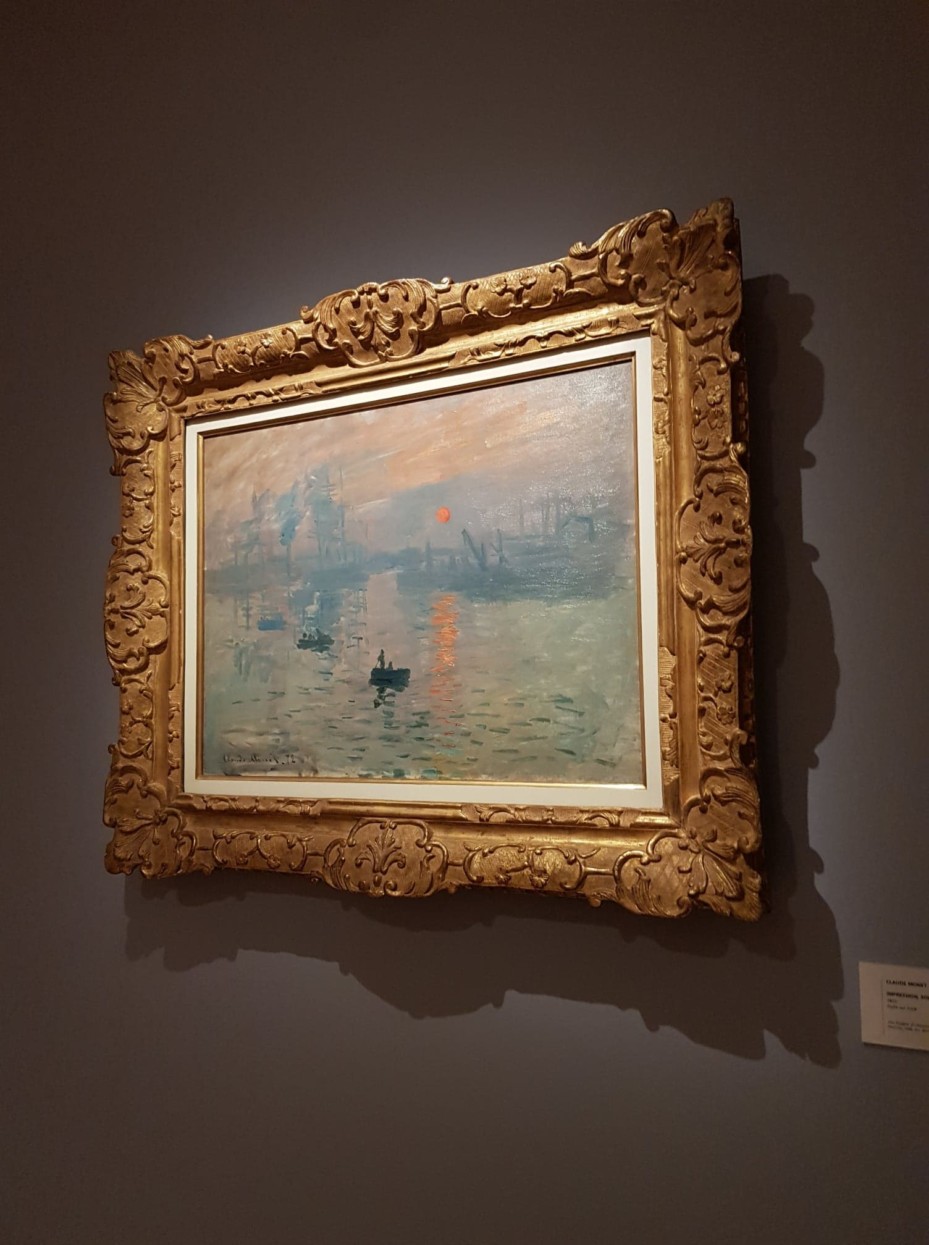 If this work is a milestone in the history of painting, it required only a few hours of work from Claude Monet and remains today a founding work for the career of this exceptional painter, one of the leaders of the Impressionist movement. Born in 1840, Claude Monet was at the origin, with his friends Sisley, Pissarro, Renoir and many others, of the birth of this anti-academic current in the mid-1870s. The choice of themes, the visible touch, the expression of movement, are some of the so many characteristics that shocked the critics of the time. Yet Impressionism, and its most illustrious representative Monet, would go down in history and influence a whole generation of new artists.

But let’s come back to the painting, which Claude Monet had originally named: Vue du Havre (View of le Havre).  He chose to exhibit it in April 1874, for the first exhibition of the Société anonyme des artistes peintres, sculptors and engravers. A group of thirty artists, most of whom did not share the conventional views of the jury of the official Salon, decided to mount their own exhibition in the salons of the photographer Nadar at 35, boulevard des Capucines in Paris.

Later, Claude Monet remembered this first exhibition at Nadar’s and confided to Maurice Guillemot, journalist of the Revue illustrée:

“The landscape is only an impression, and instantaneous… I had sent something made in Le Havre, from my window, the sun in the mist and in the foreground some masts of ships pointing… I was asked for the title to put in the catalogue, it could not pass for a view of Le Havre, so I answered: “Put Impression”. Edmond Renoir, who wrote the catalogue for the exhibition, completed it with “Sunrise”.

The title was given! Monet is not the first to use the term of “impression”, but his painting will popularize it. Especially thanks to the ironic comments of the Charivari’s art critic, Louis Leroy, who wrote in 1874 a mocking article about this very first exhibition of the future impressionists. In it, Leroy spotted a particular painting by Monet, and wrote:

What does this painting represent? Impression! Impression, I was sure of it. I also thought, since I’m impressed, there must be some printing in there.

He even entitled his article The Impressionists’ Exhibition, and added in his article that “Wallpaper in its embryonic state is even more made than this marina.”, making fun of Monet’s quick touch, which gives the canvas an unfinished look.

Now let’s take a closer look at the painting, especially at the sun. It is undoubtedly the central point of the composition. It stands out for its warm hues and sharpness, in the middle of the cold and foggy atmosphere of the harbour. Numerous studies have been carried out on this glowing sun. Some historians have expressed doubts about its nature: rising, or setting? So, in 2014, the Marmottan Museum published an in-depth study on the datation of the work. Thanks to the study of topographical data, such as tides, weather reports and celestial trajectories, it is certain that it is indeed the rising sun. Investigators even put forward a precise date for its execution: November 13, 1872 at 7:35 a.m., 30 minutes after dawn. Claude Monet painted this painting in a few hours, from his hotel room on Quai de Southampton in Le Havre. He did not know at the time that it would mark a real turning point in Art History!

In the background, the industrial port of Le Havre can be seen. Born in 1840 in Le Havre and having grown up there, the city takes on a special character for him, the port is a landscape he knows well and one of his favourite themes. He represents it here in this industrial navy, a true representation of the Industrial Revolution then very recent, and which fascinates many artists. The smoke from the factories blurs the light of the nascent sun, changing the atmosphere and colours and giving the impression of London fog. The silhouette of a boat occupied by two fishermen stands out in the foreground, in a sea whose water has a blue-green hue. A little further on, a second boat reinforces the effect of depth.

Monet’s not the first to paint sunrises and sunsets over the city. He was inspired in particular by a number of works by William Turner, also a precursor of Modern Art. In Impression, Sunrise, Monet does not hesitate to represent not a cliff or a beach, but a port, which is moreover industrial.

With Impression, Sunrise, we find several themes dear to Monet: the illustration of the 19th century industrial boom, the representation of water, the inscription of the human silhouette in the landscape. But above all, the painting fully expresses Monet’s essential research: the rendering of the moment, the luminous perception of the atmosphere that surrounds things. At the bottom of the canvas, on the water, Monet goes so far as to add long contrasting touches, to represent the movement of the water and its reflections.

This way of putting paint on the canvas is truly revolutionary, and all of Monet’s painting have a revolutionary look. This is particularly noticeable if you compare it with a similar scene painted a few years later by his master Eugène Boudin, who was not considered to have a conservative style, but a modern one.. still not as modern as Monet!

Impression, Sunrise will go from hand to hand, in a singular way. After the exhibition, the painting was sold in 1874 to the collector Ernest Hoschedé, for the substantial price of 800 francs (equivalent of 3 000€ at the time) and Monet does not yet know that he will soon love and eventually marry Alice Hoschedé, Ernest’s wife. When Hoschedé goes bankrupt, his collection is dispersed at a sale. For Impression the bids do not exceed 210 francs. The buyer then sells it to Donop de Monchy, its last private owner. In 1957, Impression, Sunrise is bequeathed to the Academy of Fine Arts and kept in the Marmottan Museum, where it was stolen in 1985¹!

Fortunately, it was recovered five years later in 1990, and can still be admired in the Parisian museum, where I strongly advise you to go, because it is empty at the moment. If you can’t come to Paris right now, make sure that when you do you stop by the beautiful Marmottan Museum with your favorite guide 😉 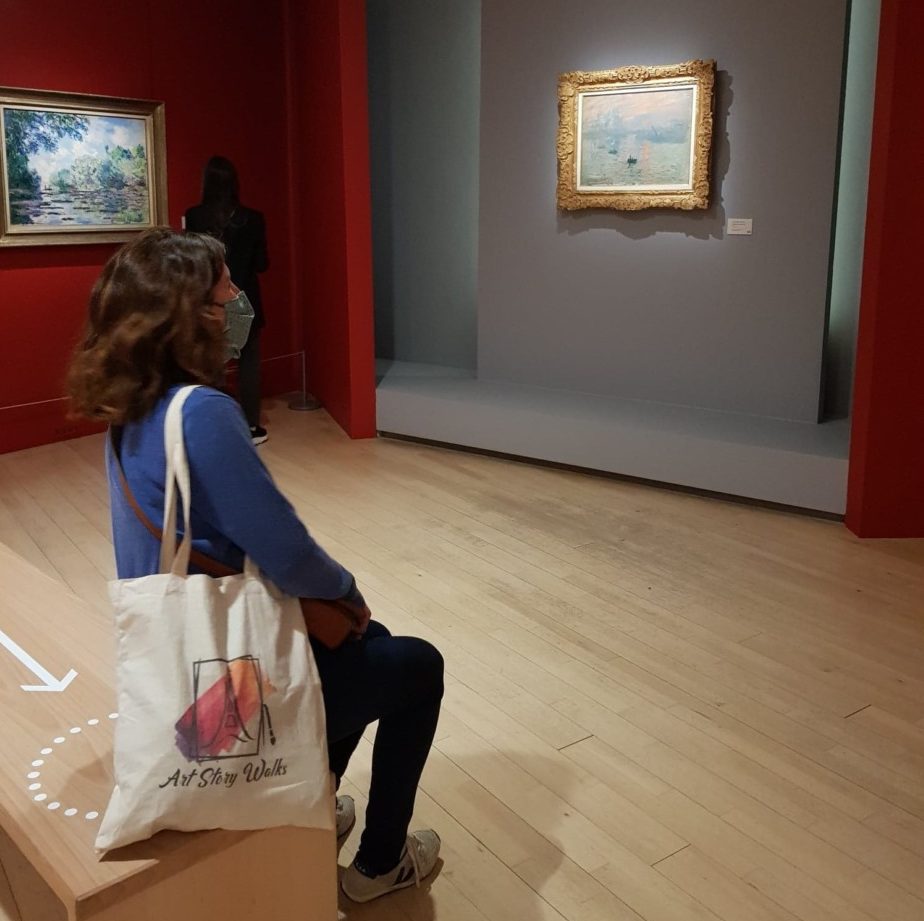